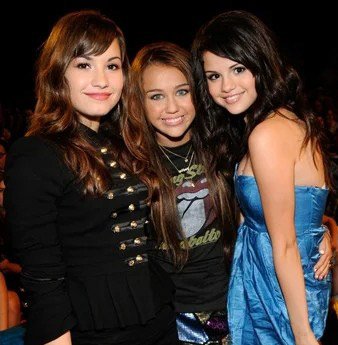 I’m a huge Disney fan so it’s no surprise that so many of today’s talent comes from that conglomerate. I decided to list 6 of the top kid stars that started out on Disney and are superstars today!

Britney was cast on The Mickey Mouse Club (MMC) when she 11-years-old. Starting off as a cute tween in the early ’90s, Britney released her first single “…Baby, One More Time” in 1998 and she’s been a superstar ever since. With fragrances sold out tours, including a Vegas show, Britney has become a pop icon.

Demi rose to fame as the star of Camp Rock opposite the Jonas Brothers. The singer/actress then went onto star on her own show, Sonny with a Chance, on the Disney Channel. While Demi has faced many challenges, like addiction and an eating disorder, she continues to shine by being authentic with her fans and wowing people with her incredible talent.

Hilary Duff won the world over as adorable Lizzie McGuire on the Disney Channel. The show was such a hit, it also became a movie with a soundtrack Hilary got to sing on, which launched her singing career in the early 2000s. Today, Hilary Duff stars on TV series “Younger”, is a published young adult novelist, beauty investor, and fashion designer.

Another Mickey Mouse Club alum who went onto superstardom is Justin Timberlake. After MMC was cancelled, Justin went onto join multi-platinum boy band, *NSYNC. If that wasn’t enough, Justin became an even bigger success as a solo artist, actor, and businessman.

Before Selena became a multi-platinum pop star, movie producer, and beauty entrepreneur, she had guest spots on Disney’s Hannah Montana before starring as Alex Russo on her own Disney Channel series, Wizards of Waverly Place.

…And last, but not least is Hannah Montana herself. Miley Cyrus is known for her amazing talent, rockstar style, and outrageous performances! Before the singer/actress was actually a rock star, she played one on the Disney Channel as Miley Stuart/Hannah Montana. Miley Cyrus often references her big break on social media, which is nice to know that even though she shed her Hannah Montana image, she will never forget where she came from or her Disney fans.